Horsesmouth helps tens of thousands of financial advisors every day to run smarter, growing advisory practices. Learn how Horsesmouth can help you.

The 99% Rule for Spousal Beneficiaries of IRAs

A spouse who inherits an IRA or similar account has a couple of options available depending on what the end goals are. But in most cases, the 99% rule is the optimal strategy for maximizing flexibility and preserving the stretch.

It sounds odd to say, but death is a part of life for us all. It’s one of the few things that all clients will have in common at some point, and it’s one of the few issues that must be addressed in every client’s plan.

No obligation, no credit card

Learn more and get started for free.

While each client situation is unique, however, and they all have their own goals and objectives, the overwhelming majority of married clients with IRAs and other similar accounts, such as 401(k)s and 403(b)s, will name their spouse as their primary beneficiary as part of their estate plans. As such, knowing the rules for when a spouse inherits an IRA is critical for just about every advisor.

Unfortunately, the rules are not all that simple, especially when compared with the rules for when a child or other non-spouse beneficiary inherits the same account. That’s because there are a slew of special rules that apply only when a spouse inherits an IRA, and those rules can greatly complicate matters.

Consider the real-life case of Charlotte Gee, a surviving spouse beneficiary who learned this rule the hard way. After inheriting more than $2.5 million in IRA funds from her deceased husband, Gee (who was younger than 591⁄2 at the time) followed the advice of some not-so-educated advisor and executed a spousal rollover of the full amount.

Shortly afterward, she took a distribution of $977,888 from the IRA. Although Gee reported the amount as taxable income, she did not factor in any 10% penalty because she said she was a beneficiary.

The IRS challenged her on this, and ultimately the issue went to tax court, where Gee’s argument was swiftly dismissed, leading to a penalty of nearly $100,000 on top of the tax bill she already owed! The tax court’s reasoning was both accurate and succinct:

Perhaps if Gee had been more knowledgeable about the special rules that apply to spouses, or had she worked with an advisor who understood the 99% rule, this never would have happened. The 99% rule can help bring some much needed clarity to the spousal beneficiary rules if you first understand the options available.

One option is to establish an inherited IRA, similar to the way a non-spouse beneficiary does. Here a spouse must move money directly from the decedent’s IRA to an inherited IRA, and properly title the account.

While the precise titling can vary slightly from custodian to custodian, the titling must include the name of the decedent, as well as indicate that the account is an inherited or beneficiary IRA. For example, an acceptable titling might look like this:

When a spouse chooses to remain a beneficiary of an IRA, he or she is able to take penalty-free distributions from the account at any age and at any time. Thus, young spouses should pay particular attention to this option. (“Young” according to the tax code in this case is anyone under the age of 591⁄2.)

This is an irrevocable decision by a surviving spouse. Once the funds are deposited into his or her own IRA, they are treated as if they had always been in the account. There is no way, at this point, for the surviving spouse to change the action taken and be treated as a beneficiary once again.

A third option allows a spouse to treat a deceased spouse’s IRA as his or her own. This option, though, is seldom used in the real world and has the same tax consequences as a spouse completing a spousal rollover.

Which option is best? The answer, of course, differs depending on the unique set of facts and circumstances surrounding the surviving spouse, but surprisingly, there is a general rule of thumb that 99% of the time will give you the right answer. All right, so maybe it’s not exactly 99% of the time, but you get the point. It’s a pretty darn reliable strategy.

Here’s the rule, in a nutshell.

Why is this strategy right so much of the time? For the simple reason that there is almost never a downside to using it. It almost always allows a surviving spouse maximum flexibility without hindering them in any way.

Some might dispute that notion and point to the fact that, by remaining a beneficiary of an inherited IRA, it would lead to the surviving spouse having to take required minimum distributions (RMDs) prematurely (before turning 70½), but that logic is almost always flawed.

Example: Jack is married to Jill and has named her as the sole beneficiary of his IRA. Jack is 55, and Jill is 50. Unfortunately, Jack dies unexpectedly. In this scenario, Jill should, without hesitation, follow the 99% rule and establish an inherited IRA, remaining a beneficiary until she reaches 591⁄2. This is the only approach that makes sense here.

Consider that, as a beneficiary, should Jill need to access her inherited IRA funds for any reason, she would be able to do so without incurring the 10% penalty. Furthermore, since Jack and Jill are relatively close in age, there will never be a time when Jill would be forced to take RMDs from the inherited account.

When she initially inherits the account, at 50, Jack was just 55, much younger than the key age 701⁄2 that would require Jill to take RMDs from her inherited IRA. Similarly, when Jill turns 591⁄2, Jack would still only be 641⁄2, had he lived. Thus, no RMDs would be required at that time either.

In fact, by the time Jack would have been 701⁄2, triggering RMDs for the inherited IRA, Jill would already be 651⁄2. By that point, following the 99% rule, she should have already made a spousal rollover of the inherited funds into her own IRA (at age 591⁄2). Following that spousal rollover, the funds would be treated as if they were always in Jill’s IRA, allowing Jill to continue to delay RMDs until she turns 701⁄2.

Similarly, some might point out that if a surviving spouse dies with an inherited IRA, the beneficiaries will be stuck using the surviving spouse’s life expectancy and will be unable to stretch distributions over their own lives.

Let’s bring back our friends Jack and Jill. Recall that Jack died at 55 and Jill, who was 50 at the time, followed the 99% rule and established an inherited IRA. Now imagine that Jill has named her children as the beneficiaries of her inherited IRA.

Unfortunately, tragedy strikes again, and Jill dies only a few years later, when she’s 53. If Jill were anyone other than a spousal beneficiary, her children would be stuck using her shorter life expectancy. As a spousal beneficiary, however, and because Jack would not yet have reached 701⁄2 (Jack would only have been 58), her children will be able to stretch distributions out over their own life expectancies.

As you can see, the two biggest downsides of inherited IRAs—RMDs and the loss of the stretch IRA for future generations—are often not an issue when a spouse inherits an IRA.

That said, I call it the 99% rule and not the 100% rule, because it’s not always the best option. So when does the 99% rule not work? In the rare but certainly not unheard of circumstance in which the surviving spouse is significantly younger than the deceased spouse. It’s what I like to call the Modern Family conundrum.

On the popular ABC sitcom Modern Family, the patriarch, played by Ed O’Neill is married to a vivacious younger woman, played by Sofía Vergara. While they’re not married in real life, let’s imagine for a moment that they are. O’Neill is 68 years old, while Vergara is just 42. If O’Neill were to pass away and leave Vergara his IRA, she’d have a choice to make in just a few years.

Since O’Neill is not currently 701⁄2, the right move, initially, for Vergara, would be to set up a properly titled inherited IRA. By doing do, she’d be able to take penalty-free distributions when needed, while avoiding RMDs and giving her beneficiaries the opportunity to stretch distributions over their own life expectancies.

A conundrum, however, would present itself in just a few years. O’Neill, whose birthday is April 12, 1946, would have turned 701⁄2 in 2016. Vergara will be 44 years old. At that time, she’ll have a critical choice to make. She could either leave the account as an inherited IRA, which would:

Or she could execute a spousal rollover, which would:

Now there’s a good chance that if Sof&iactue;a Vergara were really put in this situation and forced to make a choice, she’d opt for the spousal rollover. I have a sneaking suspicion that she wouldn’t have a need to dip into the inherited IRA anytime soon. She is, after all, the highest-paid actress on TV and has been for three years running now.

Your clients, however, may not be in the same boat. If there is even a slight chance that the surviving spouse might need money before 591⁄2, it’s probably worth leaving the funds in an inherited IRA. Sure, there will be RMDs, but even a spouse beneficiary at 50 years old would still have RMDs less than 3%.

As for ability of the spouse beneficiary’s own beneficiaries’ to stretch distributions over their own life expectancies? While it’s certainly not impossible for the surviving spouse to die before reaching 591⁄2, the mortality rates for people in their 50s are relatively low and chances are it won’t be an issue. Remember, once the surviving spouse turns 591⁄2 and makes a spousal rollover, this is no longer an issue.

Virtually every advisor will deal with these spousal beneficiary rules on a regular basis, particularly as the baby-boomer generation continues to age. So get comfortable with the 99% rule, but be sure you can identify the rare exceptions when it doesn’t apply. Doing so will help you shine when your clients need you the most.

Free Webinar: 7 Deadly IRA Sins: Ignore Them at Your Own Peril! 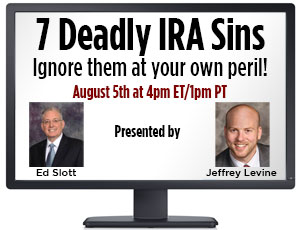 Join us for a power-packed one hour webinar and learn how to avoid seven of the most common and costly IRA mistakes that frequently trip up advisors and their clients. Many of these mistakes are fatal and cannot be undone. Get it right the first time and avoid unhappy clients... and their lawyers!